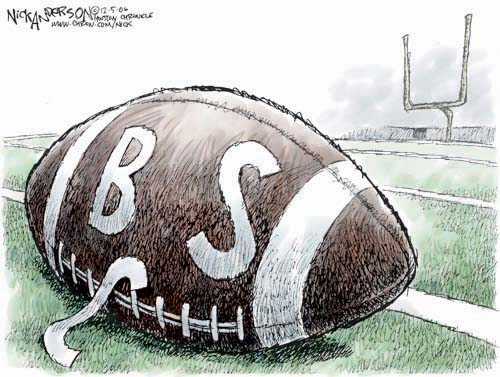 On my last article, I highlighted the near misses and heartbreaks for the Pac-10 conference between 1998 and 2010. This article will prove to be an easier read for most fans on the west coast as I rank the top 5 wins with emphasis on the following criteria: magnitude of the game, margin of victory, strength of the opponent, and impact on the conference. During the BCS Era, the Pac-10 went 10-5 in BCS bowls which includes 2 National Championships, the second best record against BCS opponents, and a 12-10 record against the vaunted SEC. The Devil’s Advocate will point out USC was responsible for more than half those BCS bowl wins (6), USC only won the crystal ball once, the Reggie Bush scandal should vacate a lot of what they accomplished between 2004 and 2005, and the Pac-10 is only 35-36 in bowl games since 1998.  However, at the end of the day, I will put the Pac-10, second to the SEC, in a tie with the Big-12 (Big-12 33-32 head to head, Big-12 7-6 in Holiday Bowls, Pac-10 2-1 in head to head  BCS Bowls, Pac-10 10-8 in total BCS bowl wins, Pac-10 better winning percentage vs. BCS teams 0.526-0.493)  ahead of the Big-10 (Pac-10 39-27 head to head) and way ahead of the ACC and Big East largely on the basis of these wins: 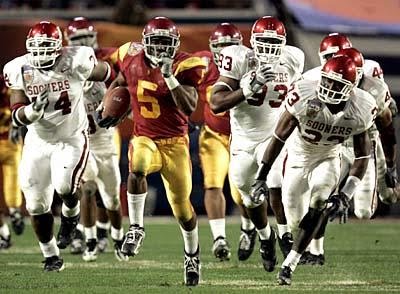 Reggie Bush sprints towards a touchdown in the Orange Bowl

The motto for the 2004 USC season was “Leave no doubt,” after USC’s snubbing from the 2004 Sugar Bowl. And outside of a small contingent of fans in Auburn, Alabama, USC left no doubt on who was the champion this season (A head to head win vs. Auburn in 2002 and 2003 plus a better 24-13 victory against ACC Champion Virginia Tech in a pseudo-away game vs. a 16-13 victory for Auburn vs. VaTech in a pseudo-home game makes me believe USC was the better team). Oklahoma was a team stacked with pros (Adrian Peterson, Mark Clayton, Clint Ingram to name a few), had the 2003 Heisman trophy winner Jason White, and whose average margin of victory was over 22 points in the Big-12 conference play.   The game was over by halftime, as the Trojans dominated both sides of the ball physically and outcoached the Sooners to an easy 55-19 win in the 2005 Orange Bowl. 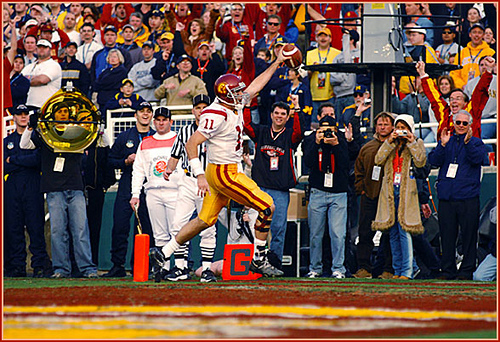 USC went out and defended the AP and Coach’s Poll decision to rank them #1 (though they were ranked #3 by the BCS) and beats a Michigan team with future Pro Bowler Braylon Edwards, Doak Walker winner Chris Perry, future #1 over draft pick Jake Long, and Steve Breaston. This was the only Michigan team good enough to have beaten Jim Tressel who was 8-1 against the Wolverines. The victory was the first of two National Championships by USC and allowed them to begin #1 the next season and complete a wire to wire  season ranked #1 in 2004.

Marques Tuiasosopo scrambles for a touchdown against Miami (Fl.)

Even though this was a regular season game and the margin of victory was small for this game, the strength of the opponent was probably a 20 on a scale from 1-10 and Washington rode this victory to a higher BCS standing to edge out Oregon State and Oregon and represent the Pac-10 in the 2001 Rose Bowl. Sixteen players for Miami playing in this game were drafted in the first round of future NFL drafts including: Andre Johnson, Willis McGahee, Bryant McKinnie, Ed Reed, Phillip Buchanon, Jeremy Shockey, Vince Wilfork, Santana Moss, Reggie Wayne, Dan Morgan, and Jonathan Vilma. This loss was the only one for Miami this season as they began their 34 game win streak up until the 2003 Fiesta Bowl the week after and ended the 2000 season with a Sugar Bowl win over Florida. The Pac-10 was 5-10 the previous season against the BCS and needed a marquee victory such as this one over for all intents and purposes an NFL team, to gain back some respectability.

Feeling as if they had been slighted by the BCS, Oregon goes out and clobbers Colorado 38-16 in the 2002 Fiesta Bowl who had just trounced BCS Championship Game representative Nebraska 62-36. Mike Bellotti had “likened BCS to cancer”  as Oregon tried to prove to the rest of the nation they had deserved to play in the Rose Bowl that year and finished #2 in both polls. Nebraska reached the title game and its quarterback Eric Crouch won the Heisman despite not winning the Big 12 Conference. In fact, they didn’t even win the Big 12 North. While we will never know what would have happened if Oregon had played the 2001 Miami Hurricanes who many believe were one of the greatest football teams ever, many of us had hoped this would at least lead to some sort of a playoff system down the line. Unfortunately it’s 2011 now and we won’t know till 2014 at earliest. 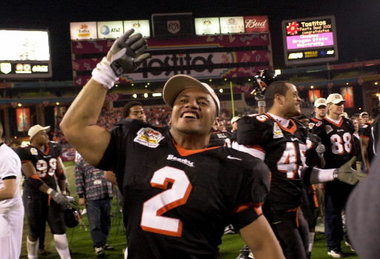 Beano Cook once said there were two ways to win the Heisman. The first was the play for Notre Dame. The other was to play well against Notre Dame. The same can probably be said about national recognition. Little known Oregon State bursts onto the national scene and trounces the most storied college football program 41-9 in the 2001 Fiesta Bowl holding the Fighting Irish to 17 rushing yards and generating 3 turnovers to a team which had only turned the ball over 8 times the whole season. QB Jonathan Smith lit up the Notre Dame secondary for 305 yards which included touchdowns to future pro-bowlers Chad Johnson (Ochocinco) and T.J. Houshmanzadeh.  Oregon State helped the Pac-10 capture its second BCS bowl victory that year after the conference had finished 1-4 in the two bowl seasons prior to 2000-2001 which included two losses in the Rose Bowl.

While this was a convincing victory which allowed the East Coast to view Andrew Luck carve up the Hokies on national TV, this game loses clout because of Virginia Tech’s loss to FCS James Madison and the fact the ACC was an abysmal 6-13 against BCS opponents this season.

USC helps cap off a 5-0 bowl season for the Pac-10 with this convincing 2 touchdown win vs. the Nittany Lions in the Rose Bowl. Penn State was aided by two late touchdowns during garbage time. The bowl season helped erase memories a terrible week 3 of the season for the Pac-10  and horrendous pre-season altogether which included a 1-6 record against the Mountain West. The poor early showing costed what I believe to be an underrated USC of a chance to play in the National Championship Game after their mysteriously poor showing in Corvallis which landed them a 27-21 defeat to Oregon State.

The Golden Bears avenged an embarrassing 35-18 shell-shocking from the Vols a year earlier which included a Playstation-esque punt return from DeSean Jackson, and  Zack Follet’s wicked hit on Erik Ainge. The game could have tacked on an additional touchdown if Nate Longshore didn’t fumble away an opportunity late on the Vol’s 1. Tennessee went on to win the SEC East during Tim Tebow’s Heisman season. This was the best showing by a non-USC Pac-10 team against the SEC during its dominance from 2002-2011 outside of Oregon’s 22-19 loss to Auburn in the 2011 National Championship Game.

The second USC victory over Michigan in four years in the Rose Bowl. A late Steve Breaston touchdown pass made the score closer than the game dictated. This was the Michigan team which played in the famous “1 vs. 2” against Ohio State in November. This particular victory is jaded by the fact Ohio State got blown out 41-14 in the BCS Championship Game proving the “1 vs. 2” game was more hype than content.

A year after beating the Razorbacks 70-17, USC wins its first game without Matt Leinart, Reggie Bush and Lendale White as they went into Fayetteville and beat the 2006 SEC West Champions lead by Darren McFadden, Peyton Hillis, and one of the most touted Rival’s prospect on the 2000s and future USC Trojan Mitch Mustain 50-14.

The first of 6 BCS bowls during Pete Carroll’s tenure as headcoach saw the Trojan’s travel cross-country and beat a highly praised Iowa team (probably the best of the 5 Big-10 teams USC beat in BCS games) which was ranked #3 in both polls in the “2003 Rose Bowl” in Miami. The lackluster start by USC prevented this game from being ranked higher, but Heisman trophy winner Carson Palmer and the high octane USC offense steamrolled Iowa in the second half. This win, coupled with USC’s early dominating victory against Big-12 Champion Colorado 40-3 let the East Coast know USC football was back on the map. Unfortunately, what else hurt this game was the fact the Pac-10 went 2-5 that bowl season promoting the beginning of the “USC and the nine dwarfs” perception from the East Coast.

The Boilermaker team the Huskies defeated was not particularly good as it finished the season with 4 losses even though it was lead by future Super Bowl Champion Drew Brees. Washington finishes 3rd in the polls after getting shut out of the Orange Bowl that year, and caps off the only two BCS bowl win season for the Pac-10.