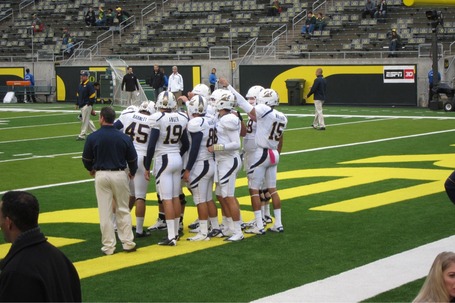 Cal warms up in Eugene

– Passing game looks sharp on the opening drive. Maynard almost gets picked off on a screen play.

– Even with a nice high kick by Giorgio, special teams is unable to contain Kenjon as he returns the kick to the 35.

– Bears (McCain) lose contain on LaMichael as he is able to get to the outside. It appears he was held by Paulson on the outside, but he needs to make sure not to lose contain. Can’t give up big plays if Cal is to win, they need to make Oregon earn their points.

-Isi makes a nice run to the outside. Hopefully this will open opportunities for Marvin and Keenan on the outside.

-KA21 almost makes a nice to to pick up the first down but it looks like the ball bounced off the ground. Probably a good idea not to challenge in that situation.

-Rain begins to pour, maybe this will slow down the spread option? Good 3 and out stand by the Bears.

-Craig James just said the Cal offensive line is “pretty darn good.” Wonder what games he has been watching.

-Cal’s defensive line has seemed to be able to get pretty good penetration even with the 4th down conversion. Seems as if the Ducks are getting away with a lot of holding .

-Bears (Kendricks) lose contain on the edges again. Hopefully, Maynard can respond with a touchdown to tie the game up again.

-Bears go 3 and out again. They need to hold to at most a field goal attempt otherwise it might get ugly…