After four games, the California Golden Bears are 3-1. A good win against Fresno State, a heart-throbbing victory over Colorado, an easy but not perfect win over Presbyterian, and a hard-fought but disappointing loss to Washington. With a third of the season over, what does Cal need to do in order to climb up the Pac-12 rankings and get into a respectable bowl game?

I will take a stab at this question by look at each position from what we have seen to what we need.

If you missed it, here was my assessment of the Backs, WRs and TEs, Offensive Line, Defensive Backs, Linebackers. 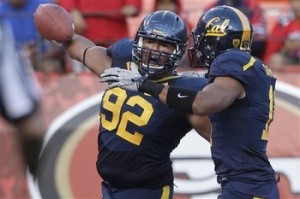 What we have seen –

Trevor Guyton is having a solid season so far with 11 tackles, 3.5 tackles for loss, 2 sacks, and a fumble recovery for a touchdown. The defensive line is a huge reason for why Cal’s defense ranks 2nd in the conference and 9th in the nation in rushing defense. However, the defensive line have not been able to disrupt the opposing quarterbacks as much as they would like to. This is one of the main reasons that Cal’s pass defense have suffered these first four games. The other two starting defensive linemen Kendrick Payne and Ernest Owusu have not yet had the production that Cal expects from their defensive linemen. Even the supporting cast of Deandre Coleman, Vei Moala, Aaron Tipoti, and Mustafa Jalil have not produced as much as we would have liked. We also haven’t seen much of Gabe King and Brennan Scarlett, but that may change later in the season.

Tosh Lupoi needs to better the techniques of his defensive linemen so that they can get to the quarterback. Trevor Guyton and Ernest Owusu has much more ability than we have seen so far, it is just that they have yet to capture all of their potential. Both Deandre Coleman and Vei Moala needs to show why they were recruited so heavily. If both Coleman and Moala can get it going during the rest of the season, opposing offensive lines are going to have nightmares because of how big and strong these guys are. However, if these linemen have no technique or ability to read their opponent it won’t matter how big they are. This ultimately will come down to the coaching ability of Tosh Lupoi, who has already sent two defensive linemen to the NFL in back to back years.

Assessment of the Defensive Lineman so far: B+, rushing defense is solid but there could be much more improvement on attacking the quarterback.

Error: Twitter did not respond. Please wait a few minutes and refresh this page.