Washington 14 – California 22: I predict a low scoring game. Hopefully can get revenge for To$h as well as the bowl streak ending two years ago. A big win on the national spotlight on Friday night might bring second life into the program.

Stanford 28 – Colorado 17: Stanford is going to be begin musical chairs but should take care of the Buffs.

Oregon 35 – USC 26: Been looking forward to this game for a while. The shine has been wiped off a bit because of USC’s two losses but this should be entertaining none the less.

Arizona 23 – UCLA 48: UCLA win for the California is starting to look more and more like a blip on both sides.

I was absolutely terrible last week, kind of like Cal’s offense and special teams.

Washington 17 – California 24: I have yet to predict against my Bears, so I’m not going to start now.

Washington State 21 – Utah 31: Utah will continue their 2nd half run with a good fight against WSU.

Oregon 32 – USC 36: Game of the week. I’m going with the upset here. Matt Barkley to Woods and Lee all day.

Arizona 21 – UCLA 28: UCLA will play stout at home even against a powerful offense led by Matt Scott.

Arizona State 17 – Oregon Sate 28: Cody Vaz is starting, so as long as OSU’s defense shows up like usual they’ll get the W.

Colorado 20 – Oregon 42: Probably another win by halftime for Oregon with lots of experience time for their 2nd and 3rd stringers

UCLA 32 – Arizona St. 45: Would love to pick the “upset” here but I can see the Bruins just toil towards the end of the season.

USC 38 – Arizona 24: Arizona plays USC pretty tough usually but the Trojans probably have too much on offense.

Washington St. 24 – Stanford 42: Stanford probably has too much talent inside to run the ball, and Jeff Tuel passing 50 times isn’t going to beat Stanford.

California 22 – Utah 23: If Aaron Rodgers couldn’t win here, I have a hard time believing Zach Maynard will be able to.

Oregon St. 33 – Washington 30: Reverse score of a fun game between these two programs 12 years ago with BCS implications on both sides.

Huge games for UCLA, ASU and OSU, Washington. Can Cal bounce back from a terrible loss to rival Stanfurd?

Colorado 10 – Oregon 52: Another easy win for Oregon, and another sad loss for Colorado.

UCLA 32 – Arizona St. 37: I’m going with the home team on a last second touchdown for the win.

USC 48 – Arizona 34: Barkley will continue to get back into the Heisman race.

Washington St. 14 – Stanford 32: This should be an easy game for the Cardinals.

Oregon St. 24 – Washington 7: Potential upset? I don’t think so. Not the way OSU’s defense has been playing compared to Washington’s Offense. 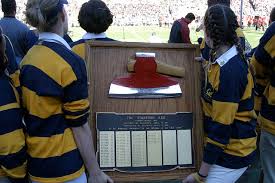 It’s that time of the year again! The Big Game is here. But wait…isn’t it October still?

Feel’s weird, doesn’t it? The Pac-12 kinda screwed us a bit here but you know what, ready or not here it comes! The 115th Big Game and the 30th Anniversary of The Play. Two weeks ago, most of us thought Cal probably had no chance against Stanford but look now, a bunch of sports analysts say Cal is going to pull off the upset including BOTH of ESPN’s Pac-12 Blog Analysts. Uh oh, in the past few years when Cal had to live up to expectations it usually spelled DOOOOOOOM for us. Stanfurd’s offense has not shown up on the road where they have yet to score an offensive touchdown while Cal has looked pretty good the past couple weeks. “IT’S A TRAP!!!”. Remember all those games that Cal played where everyone was like “Oh yeah, the opposing team aren’t looking so hot right now. Cal should have a good chance of winning” and then Cal gets its ass kicked? I may be really pessimistic right now, but that’s the life of a Golden Bear.

So what does Cal need to focus on in order to win back the Axe?

Let’s get the AXE you Bears! Fans need a reason to rush the field this season and this is the perfect mid-season boost that the team needs! Go Bears! Let’s do this!!!!

Bad week for me last week. Stupid refs screwed Stanford over and now I’m officially a buyer on Oregon State.

Oregon 45 – Arizona St. 34: Remember the last time Oregon went into the state of Arizona with a #2 ranking? Ouch. Yes that was the game where Dennis Dixon pulled his ankle and Oregon which was rolling at the time, lost their chance at a BCS shot. O yea, Cal was the only team to beat Oregon with a healthy Dixon that year.

Stanford 28 – California 34: Does this score look familiar? JT, go for a touchdown this time instead of a field goal down 3 8 yards away from the end zone!

Colorado 15 – USC 48: One of these games Matt Barkley is due to explode. I have a feeling it will be this one.

Washington 34– Arizona 23: Going with the upset here. I believe Washington’s defense will be able to stop Matt Scott and the spread option for a win down in the desert.

Utah 32 – Oregon St. 35: I expect the Beavers to squeak out a victory here. Pretty exiting end to an OSU-Utah game right here in 2008 where Oregon State actually played the Beavers tougher than Alabama that season.

It’s time for the Big Game…in October. A victory here for the Bears will push them in the right direction.

Oregon 42 – Arizona St. 37: This should be quite a game with fire power on both sides. However, I don’t see ASU being able to stop Kenjon Barner and De’Anthony Thomas

Washington 21 – Arizona 33: Big game for both teams, but Arizona was able to put up a lot of points against Stanford while Washington’s offense has been struggling.

Utah 17 – Oregon St. 27: The way OSU has been playing, it is hard to see Utah being able to deliver an upset.