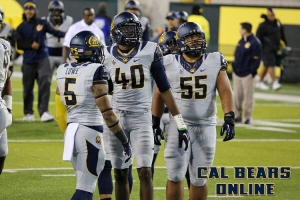 A day after Cal’s 55-16 road loss to Oregon, DE Chris McCain was dismissed from the team, according to an official Cal news release:

Junior defensive end Chris McCain has been dismissed from the Cal football team due to conduct detrimental to the team head coach Sonny Dykes announced Sunday.

Coach Dykes was not available for comment, as there was no practice on Sunday.  More information should come to light after Monday’s practice.